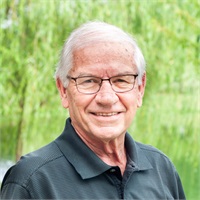 Jim Rose joined IBM's Federal Systems Division in 1969 as a personnel trainee after graduating from the University of Minnesota with a M.A. in Industrial Relations.  After several management positions and an assignment at IBM Corporate Headquarters, he was named Personnel Manager at the Manassas, VA facility.  He moved to FSD headquarters in Bethesda, MD where he became manager of employee relations, manager of Business Planning, Manager of Strategic Market Investment Strategy and finally Assistant to the President of FSD.  He retired from IBM in 1996.  He and his wife Leslie spent their early retirement years traveling around the country and enjoying time in Northern Virginia with many long time friends, as well as winter time in Naples, FL with their snowbird friends.  In 2014, they moved to Richmond permanently to be closer to Jen and Frankie.  They still enjoy traveling, playing bridge, seeing movies and plays and spending time with their 2 kids- Jen who is married to Frankie and Brian who is married to Missy and lives in Decatur, GA.  A favorite are family vacations with the kids and their 4 grandchildren.  In 2017, Jim joined True North Advisors, LLC as a paraplanner and his been a tremendous asset and key to the growth of the practice.